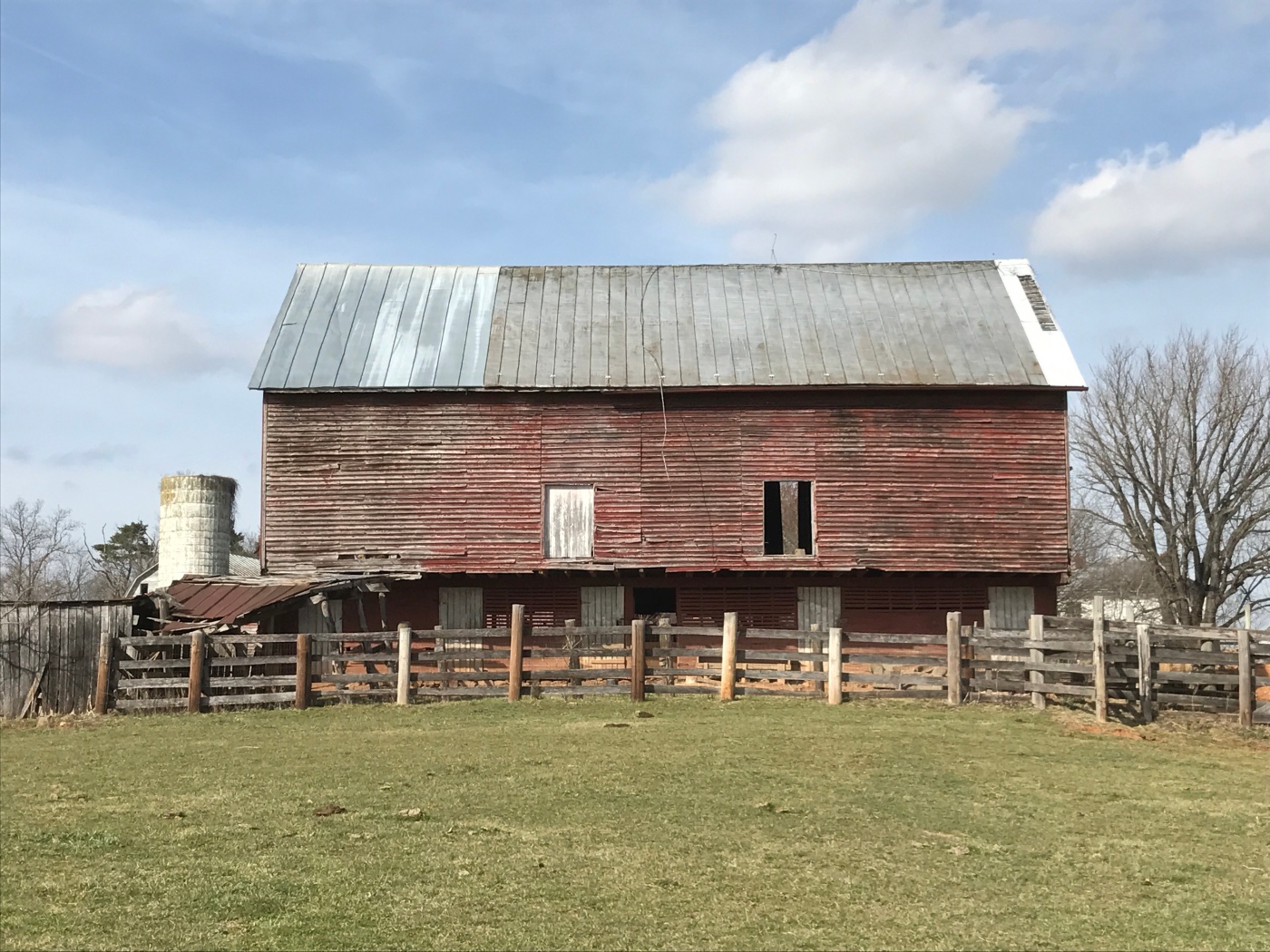 The large red barn on our property is a bank barn.  A bank barn isn’t a barn that holds your entire bank; it has nothing to do with money or your earnings.

The history of barns in the United States is directly related to the time period and the needs of the farmers.  The early English barn plans that the first settlers brought over were not designed for large-scale agriculture; they were used for the harvesting and storing up of grains.  The average farmer and early settlers of the 1700 – 1800’s did not have herds of livestock; they needed only a few stables for the family cows and workhorses. 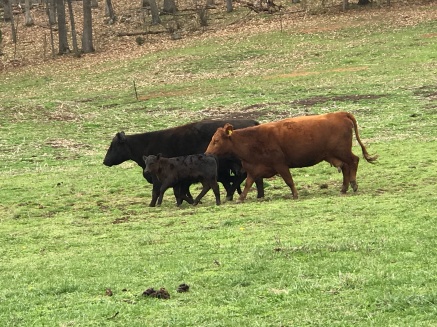 As you drive across the country, the barns will change.  Up in the northeast, we see New England barns; and falling down the Pennsylvania hills are the bank barns.  In the south, the tobacco barns represent southern money.  Driving across the midwest, the prairie barns are an icon of the landscape.  Dairy barns, round barns, pole barns, dutch barns, and today’s commercial barns all reflect the needs of the people and the history of the United States. 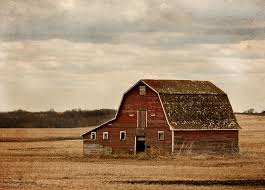 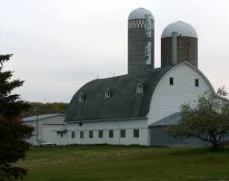 BUT,  what then is a bank barn? 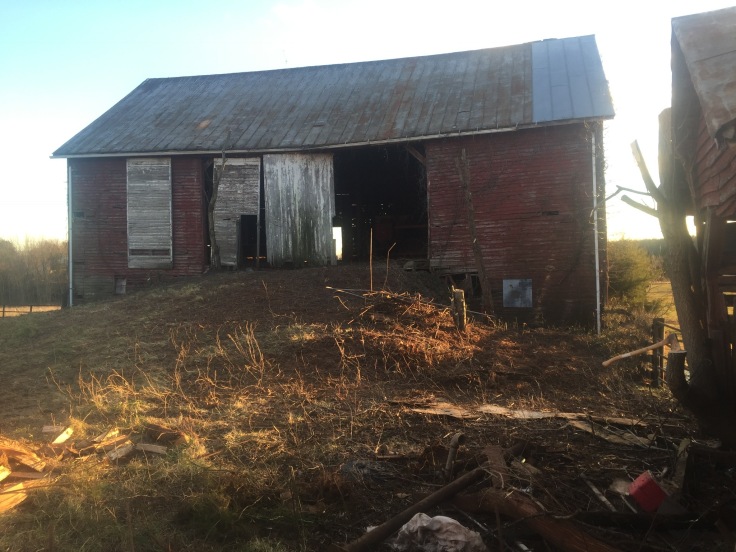 It is a barn built up against a land mass – either a hill or a mound of dirt acting as a hill. Primarily, a bank.  Originating in Pennsylvania and mostly built by the German immigrants, these barns were popular in the 19th century.  In fact, just recently I was in Pennsylvania and it seemed that every barn I saw was a bank barn.  Even though we have small rolling hills across the property, our bank barn was built against an artificial, man-made hill.

The base of the barn is built of stone.  Most likely some of these stones were found while digging the hill, others were probably brought in; but all were used to support the  foundation  of the barn.

These structures were sometimes referred to as “basement barns” because of the exposed basement.  Built into the side of a hill, or bank, both the upper and the lower floors could be accessed from ground level.

In the bank barn, the upper floor was designed with space for a hayloft, threshing area, and room for equipment storage.  There were small cubicles for storage as well. 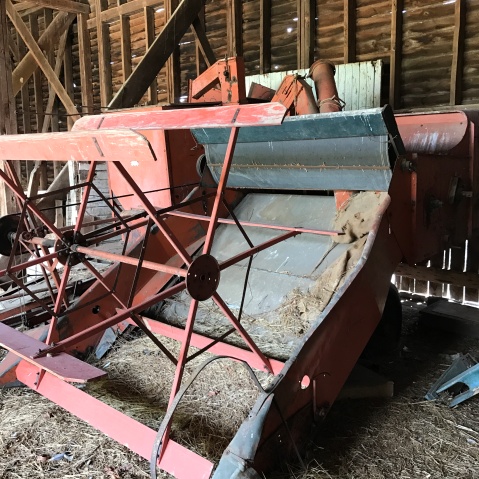 Left in our barn was this old friend.  I am not very educated on farm equipment, but I assume this is a thresher or a hay baler maybe from the 1940’s.  Please feel free to comment if you know this piece of equipment’s use or name.

Clearly, this is where the bales of hay were stacked. 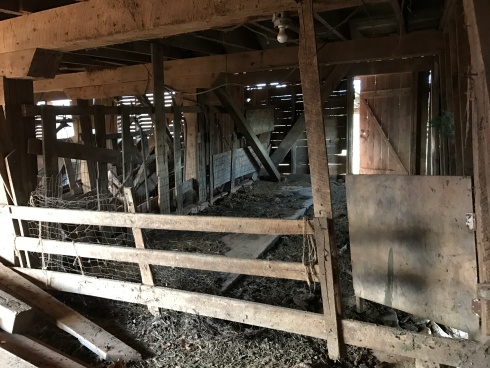 The lower section was used as a stable area.

A common arrangement for the lower floor in the barn was an open bay in the middle, with stalls on one side and an area for milking cows on the other.

When entering from the lower level, our bank barn had the milking area to the left; however, the right side was used for storing potatoes and onions.  In fact, many of the old quilts we pulled out of the attic were used to cover these potatoes and onions.

The double barn doors were typically on the side wall instead of the ends.  Can you imagine driving your tractor right through these barn doors?

Opposite the main double doors at the back of the barn was a small winnowing door.  It opened high above the farmyard level and allowed the farmer to throw hay and feed down to the animals or to a cart.

Another identifying feature of the bank barn is the continuous canopy on the back of the barn that protected the stable doors and entrances.  This canopy provided a dry area for the farmer to work with the animals or even hitch up the plow.

The bank barn, like many of the other types of barns, tells a story of the farmer’s needs and the history of the time.  Will it eventually disappear?  Will they become a pleasing decay and eventually bow their beams back into the ground?  It is very likely.  Driving around Nokesville, Virginia, there are many barns; however, most are not bank barns. Over time the banks have pushed the barns back, and very few are left standing.  Our desire is to save this little piece of history and restore it to it’s original splendor.